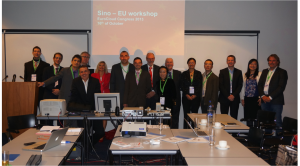 At EuroCloud Congress held in Luxembourg on October 15th - 16th 2013, in a workshop on cooperation between China and Europe on Cloud Computing, aKite was presented as an example of a European SaaS which can be delivered also in China.

This meeting follows the official visit of EuroCloud representatives at the 5th Cloud Computing Conference held in Beijing on June 5th - 7th 2013, which established officially the relationship between EuroCloud and the Chinese Institute of Electronics on Cloud Computing.

Ken Ducatel the European Commission had to admit that the current Internet closure by the Chinese government restricts international collaboration possibilities, but there are positive signs as the agreement announced in May 2013 between Microsoft and 21Vianet, the largest Chinese operator of independent datacenter, for provisioning Windows Azure Cloud services within China. Currently Cloud services for Chinese companies has to be provided by data centers physically located within the national territory and aKite is precisely based on the Azure PaaS (Platform as a Service).

The speech given by Wladimiro Bedin "There is much talk about Cloud Computing on the Retail Future " was followed by a lively discussion, sign of interest in such booming sectors in China as Retail and Cloud Computing.