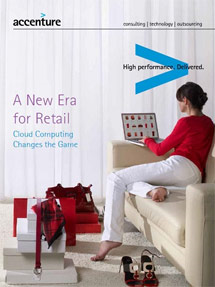 Accenture has published the interesting "A New Era for Retail" white paper.

Starting from the consideration that the wide use of digital technologies by consumers is revolutionizing the retail worldwide, concludes that Cloud Computing is the most appropriate technology as it is the only one that allows real-time access to clients and partners data repositories spread across different cloud and on-premise. To be closer to customers, IT needs to look more outside the chain.

In the past, many chains have invested in POS as a differentiating factor, writing the software in house or heavily customizing third parties software, thus remaining locked, with high costs and resources more devoted to maintenance than to evolution. In the cloud era, the new differentiation is based instead in the combination of standard services selected from a growing ecosystem and integrating with each other and with on-premise legacy systems (Hybrid Cloud). The CIO role rises to a higher level and nearer to business strategies.

Cloud Computing, a vast concept forced by marketing, is at the same time the terminus of traditional IT and the starting station of a completely new IT. Between the two generations, there is a paradigm discontinuity not generally perceived, as it happens in all radical innovations.

The white paper provides an overview of the various business areas with examples from the U.S. market. In my view the 8,650 servers removal from Target stores and virtualization in a datacenter, is better defined as hosting: a last century innovation that while representing a definite step forward. This specific example can’t be classified as Cloud Computing, which in its definition contains essential features such as multi-tenancy and rapid elasticity, requiring a software redesign, but providing a level of scalability, SLA and efficiency not achievable with traditional software.

Only Cloud native services can open a new era in IT for Retail, but as it is not certainly possible rewrite overnight all the software, the way to go is to the Hybrid Cloud where Cloud native SaaS are integrated with legacy software.